Sony made the stakes in the 4K action camcorder niche higher when it announced the release of the FDR-X1000V. This niche, which used to be ruled by GoPro, has become crowded with a number of decent entries from manufacturers like SJCAM, Garmin, Yi, and Olfi. Manufacturers are tussling to make better cameras with improved resolutions, image stabilization, activity sensors, water-proof features, and auto-editing features.

Action cameras have historically been the reserve of swimmers, rock climbers, skiers, and adventurers. However, their detailed resolutions, powerful features, and affordable prices have made them favorites with professional and amateur movie makers, and even consumers. So how does the Sony FDR-X1000V compare with other camcorders? 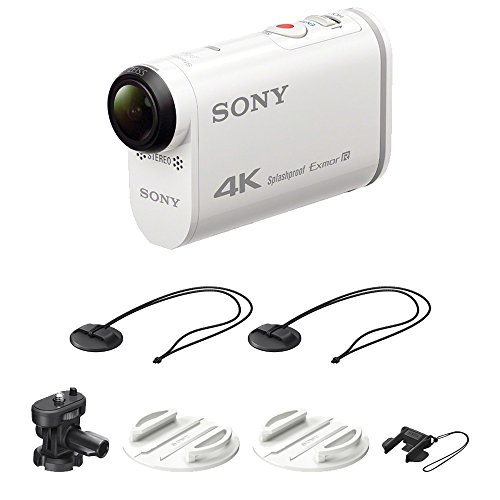 Perhaps the most outstanding feature of the FDR-X1000V is its 4K (30fps, 3,840 x 2,160) resolution. It is worth noting that for this camera to record in 4K, it uses the XAVC S codec, which requires the use of an expensive SDXC card (Micro SDHC won’t work).

The Sony FDR-X1000V camera is equipped with the Bionz X processor, which enables it to do loop recording, live streaming, continuous still shooting, slow motion and Motion Shot LE. The FDR-X1000V can shot stills at 11.9 MP, but its 4K maxes out at 8.8 MP.

This camera costs about $500 on Amazon. However, the GoPro HERO5 arguably has more features than the Sony FDR-X1000V but costs almost twice as much.

We picked a few similar products available on the market to see how they compare. 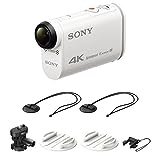 The Sony FDR-X1000V costs about $400. This is higher than many consumer camcorders, but for an action camcorder with 4K resolutions, it is not too steep of a price.

At about $230, the GoPro HERO5 gives users real value for money. The camera can be bought for just half of the price of the Sony FDR-X1000V, yet the HERO5 is more portable and has a number of great features that the FDR-X1000V does not have.

For some time, GoPro has been the dominant manufacturer for action cameras, with its HERO5 camera being a prime example. The HERO5 can record video at resolutions of up to 4K at 30fps, and it can take still photos of up to 12 MP. This camera excels in terms of looks with a matte exterior and a width not much bigger than that of a matchbox. The HERO5 boasts a two-inch touchscreen LCD display and a big red recording button.

This camera is waterproof without a case up to 10m, which is why GoPro did not give this camcorder a waterproof case.

The HERO5 has voice controls and supports seven languages. The camera also has a voice control remote that makes operating it with the voice easier. Like the Sony FDR-X1000V, the HERO5 has a built-in GPS. However, its functionality is limited to geotagging photos and videos.

The HERO5 has a 1220mAH battery that can record video for one hour and 56 minutes. The camera is compatible with the Karma drone, an aerial photography accessory kit that can be bought separately.

The camera can get you access to GoPro Plus, a $5-per-month subscription cloud service that can help users publish their videos. Using this service, the camera can upload photos and videos seamlessly through Wi-Fi. You can see your media through the Quik app and GoPro website. The app also has auto-edit abilities and can automatically add appropriate audio tracks to videos and photos to make shareable content.

The Panasonic HC-V770 is a mid-range consumer HD camera. Compared with other cameras in its class, this camera is impressive on all counts. It has a 1/2.3in CMOS and takes photos at 12.76 MP. The camera has a standard optical resolution of 20x, but this can be increased to 50x by its intelligent zoom feature. The HC-V770 is capable of recording at 50Mbps in MP4 mode and also has a full HD slow-motion option at 100fps.

The camera has Wi-Fi capabilities that can enable you to operate it remotely. It t can be used as a baby monitor and surveillance camera. However, if you are interested in recording on 4K or if you regularly record in wet conditions, then the HC-V770 will not meet your needs.

The VIXIA HF G40 is a high-end full-HD prosumer camcorder that can cater to the needs of amateur filmmakers, wedding videographers and reporters. The camera has a 20x wide-angle lens and Digic DV 4 image processor. Unlike many mushrooming consumer camcorders that are replacing buttons with touchscreen functions, this camera has a number of buttons, making it very user-friendly. The camera can record at 60p in mp4 and AVCHD and has slow and fast-motion modes of up to X1,200. The camera has two SD card slots and Linear PCM recording.

The Sony FDR-X1000V is a good 4K action camera alternative to the GoPro HERO5. Its solid build and good battery life make it a good camera for outdoor enthusiasts. However, the innovation of GoPro in this niche makes justifying buying the FDR-X1000V hard. Apart from the superior battery performance of the Sony FDR-X1000V and the pedigree of the Sony brand, you will be hard-pressed to find any specific areas in which the Sony FDR-X1000V outperforms the HERO5. GoPro's HERO5 is lighter, more user- friendly, more water-friendly, cheaper, and would definitely be a better purchase for most action camera users.

Semi-professional users who do not mind recording in 1080p and are comfortable with the weight and the $900 price tag can invest in the Canon VIXIA HF G40. The Panasonic HC-V770 is a good option for users who do not need 4K recording abilities and want a high-quality camera for use on the go.