Do you have kids, pets, or siblings? Perhaps you love to travel? If so, you may be considering a Panasonic HC-V160 camcorder to capture all the moments. This is a long zoom camera, so if your kid and your pet start to run off into the horizon, you’ll be able to film them.

I used to own a decent Digital Video (DV) camcorder, but eventually, my iPhone replaced it. The camcorder sat in a box for a few years before I finally sold it through a Facebook group. Then I had my first child and quickly realized that trying to capture every moment with a cell phone doesn’t always work.

If only I had my trusty DV camcorder again, I could record everything. I can almost picture myself sitting in my living room like an old man, watching the tapes of my children when they were babies. I would probably laugh at the horrible fashions I wore in the early 2020s! Instead, I’ll have a few short 30-second clips saved in iCloud somewhere. It’s just not the same.

Do yourself a favor and consider getting a camcorder. Yet is the Panasonic HC-V160 a good pick?

All About the Panasonic HC-V160 Camcorder

The Panasonic HC-V160 long-zoom camcorder was all the rage in 2015 and 2016. It was one of Panasonic’s best-selling camcorders until they put out the Hc-V180 in 2017. The company has stopped production of the Panasonic HC-V160, so anything you find now is excess stock.

It’s still a decent camera from one of the world’s largest camera manufacturers. Panasonic has been around a long time. The company was founded in Japan in 1918 as a lightbulb socket maker. It soon began making lamps and camera lenses. By the 1930s they were making electronics for the Japanese military, which was starting an aggressive war of expansion at the time.

Panasonic supplied the Japanese war machine throughout World War II. People accused the company of profiting from slave labor in China, Indochina, and Korea. The company has never commented on this. From the rubble of that war, Panasonic rebranded in the new Japanese economy and started making consumer electronics. By the 1970s they were one of the larges camera makers in the world!

The Panasonic HC-V160 is part of that long history. Panasonic knows cameras, and the HC-V160 shows that.

If you want to record video at a distance, you’ll love the Panasonic HC-V160. It has intelligent zoom software which uses super-resolution to stabilize and balance images at up to 38-times zoom. It records at 1080-pixels resolution. This is great for shooting outdoor events such as concerts.

Also, this camera can shoot still pictures with an 8.9-megapixel camera. A 2.7-inch LCD touchscreen display allows you to control every aspect of the camera easily. Several pre-programmed modes are included, such as eight-millimeter, time-lapse, silent movie, and other cool recording effects.

Although it’s an older model, it’s still a popular camera. This affects its price, which hasn’t dropped too much.

This camera comes with Panasonic’s standard one-year warranty, which covers both parts and labor to repair any problems caused by manufacturing defects. Note that attempting to tamper with the lens or the LCD could void the warranty.

How I Reviewed These Cameras

To compare the Panasonic HC-V160 to other models, I researched four similar camcorders. These were the Sony Handycam, the Canon VIXIA, the Ablue 4K Ultra HD, and the Sosun HD camcorder. I went to each company’s website to learn a little about them.

Next, I went to Amazon and read through a lot of customer reviews. I trust reviews written by real people, and I love that Amazon lets me know whether or not a person is an actual customer. I was able to get a good idea of how each of these cameras handles in the real world.

Before we look at the other cameras, I wanted first to see what people thought of the Panasonic Hc-V160. Amazon customers gave it 4.2 out of 5 stars. Most people said they liked how intuitive the LCD menu is. The HD image is good, and the zoom is incredible. Many people were not impressed with the audio recording. A few people said voices and sounds are “tinny” when played back.

How the Panasonic HC-V160 Stacks up to the Competition

If you’re like me, you’ll want to check out all your options before spending large amounts of money. How well does the Panasonic HC-V160 compare to other models? Is the high price for an older camera worth it? There are always comparable models out there, so I’ve decided to look at four of them. These are camcorders you’re most likely to come across as you shop.

First up in my comparison is the Sony Handycam HDRCX440. Sony makes several models of Handycam, but I’ve chosen this one because it is the most comparable in price to the Panasonic HC-V160. Sony, as you are probably aware, is one of the biggest electronics companies in the world. I love that it was started in the ruins of Tokyo just after World War II ended. A young man set the company up in the corner of a destroyed department store and started building radios from scrap parts he found laying around. Some of his first customers were American GIs who had just arrived to occupy the country!

Sony has been making the Handycam for years. The HDRCX440 Handycam has 60-times digital zoom with “Clear Image” software support. Optical steady shot stabilizes images filmed at a distance. Best of all, the Handycam films in MP4 so you can easily transfer files to other devices using Bluetooth or Wi-Fi.

Customers on Amazon love the Handycam, rating it 4.1 out of 5-stars. The image is clear and consistent, and the fact that people can record right to a USB is convenient. Some people did complain about the lack of a touchscreen.

There are many models of VIXIA camcorders, but the HF R80 is similar in price and features to the Panasonic HC-V160. Canon’s VIXIA line of cameras is relatively new, although Canon itself is not. They’ve been making optical devices since beginning in 1937 in Japan. Canon is most famous for the Leica camera, which revolutionized the way consumers can carry a light camera around and snap pictures quickly and cheaply. Today’s VIXIA camcorders are a worthy addition to that history.

The VIXIA comes loaded with technology. It sports a 57-times digital zoom backed up by optical image stabilization. You could almost film moon craters with this thing! It takes Digital Videocassettes, so you’ll need some other hardware if you want to transfer your video to a DVD or your computer.

Despite the features, customers on Amazon only gave the VIXIA 3.6 out of 5-stars. People loved the zoom and the image stabilization while zoomed in works fantastic. Many people complained that it’s challenging to transfer from the camera, and some people even complained that it’s only good for six minutes of recording time before it shuts off by itself. 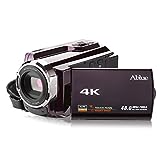 This camcorder records in Ultra HD and a smart digital process inside of the camera converts the image to 4K. The camera is brimming with technology, such as the ability to record directly to social media through Wi-Fi and Bluetooth. A wide-angle lens with infrared and night vision allows for shooting in almost all conditions. It has a three-inch LCD touchscreen, and you can even link it to your phone via Bluetooth and control the camera from a distance!

Unfortunately, there is no warranty, which makes me hesitate. Customers on Amazon rated it 2.2 out of 5-stars. The biggest complaint was that it isn’t a 4K camera. The image transference doesn’t work and at best images come out as low-quality HD. One customer simply wrote “crap.” 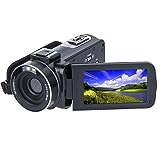 Finally, there is the HD camcorder from Sosun. This Chinese company is an electronics wholesaler who also brands some of its products, such as this HD camcorder. I chose a Sosun because I wanted to show you what you can get for really, really cheap.

The Sosun HD camcorder is relatively barebones. It films in 1080-pixels and has a 16-times digital zoom. The camera stores files in MP4, so you can easily transfer your files to other devices. It has everything you could need in a camcorder, such as an LCD touchscreen display, decent microphone, ability to take still photos, date stamp footage, pause recording, auto power-off, and two LED white lights at the front for night shooting.

The Sosun is one of the most affordable cameras you can buy. Amazon customers rated it 4.2 out of 5 stars. Everyone loved how easy to use it is, and a lot of people were pleasantly surprised at the clear HD images the camera can capture. Some people did complain that the zoom is not great and there is no stabilization.

Despite all of these cameras (Ablue aside) having good ratings, they aren’t all perfect. The Panasonic HC-V160 certainly has its strengths and weaknesses.

Should You Buy a Panasonic HC-V160?

As I said earlier in this review, buying a good camcorder is worth it if you have kids or like to travel. That doesn’t mean that you need to spend your life savings on a camera. While the Panasonic HC-V160 is a decent camera, I believe you can do better for less money.

The Sony Handycam is a fan favorite. It’s about the same price as the Panasonic HC-V160 but has so much more going for it. I would avoid the Ablue camera because it just doesn’t do what it promises, and the Canon VIXIA is too expensive for what it offers.

If you don’t need a great zoom and want to film your children, then you can’t go wrong with the cheap Sosun HD camcorder. For less than a hundred dollars you get everything you need in a stylish camera. My final verdict is to go with either the Sony Handycam or the Sosun HD camcorder and to skip the Panasonic HC-V160 altogether.

SJCAM vs GoPro – The Best Action Camera For You

As a participant in the Amazon Services LLC Associates Program, this site may earn from qualifying purchases. We may also earn commissions on purchases from other retail websites.